Research on the Process of Bucket Flanging at Home and Abroad

The steel barrel barrel burring process is an intermediate preparation process for steel drum assembly molding, which directly affects the quality of the steel drum finished product, and is one of the most important processes in the production process.
There are many methods for burring the barrel at home and abroad. Generally, it can be classified into three types, namely, mold flanging, rolling cuffing and bulging cuffing. In the domestic barrel industry, rolling and flanging is more common, and the modern barrel production line mostly uses mold flanging and bulging.

As shown in Figure 1, it is a schematic diagram of the working part of the mold flanging. This flanging method is generally hydraulically driven and can be automated. Firstly, the hydraulic body (or pneumatic) dial mechanism is used to pull the barrel into the initial position in the flanger, and then the die top rod moves to the middle under the action of the hydraulic cylinder. When the head of the stamper enters the edge of the barrel, the cone is inclined by the pressure plate to face the barrel body, and the position of the mold is advanced to the middle to clamp the barrel, and then the edge of the barrel is under the action of hydraulic pressure. When the width of the flange is up to the process requirement, the edge of the barrel is pushed up by the limit step of the outer ring of the die, and the displacement of the die is greatly resisted. When the stamper is subjected to resistance, that is, when the hydraulic pressure reaches the set pressure, the electromagnetic reversing valve is reversed, and the hydraulic cylinder returns, so that the stamper is quickly withdrawn from the inside of the barrel. The bucket device immediately pulls the overturned bucket out of the flanger. 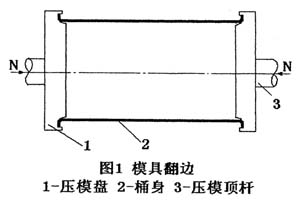 The use of hydraulic transmission not only reduces the mechanism, but also gives the flange a greater force. More importantly, the degree of pressure is used to adjust the degree of cuffing of the barrel, so that each barrel, regardless of the length of the barrel, the width of the cuff is always guaranteed. If the mechanical transmission is adopted, since the transmission position can only be set to a common value, since there is always a certain deviation in the length of the barrel body, a satisfactory flanged effect cannot be obtained, and defects such as insufficient or excessive width of the flange may occur. .

The disadvantage of the mold flanging is that the transition arc angle of the flanging is too large, because the rounded corner is too small to feed, so the molding is difficult, and the resistance is large, and the arc portion of the stamper is easily damaged. In addition, due to the rebound, the angle between the flange and the barrel is not easily turned into a right angle, generally between 95 Â° and 120 Â°.

Figure 2 shows the simplified hydraulic system schematic diagram of the mold flanger. When the flange pressure reaches a certain set pressure, the pressure relay 2PD operates, that is, the electromagnet 2DT operates, so the three-position four-way reversing valve reverses, so that the hydraulic cylinder returns, and when it moves to a certain position, it hits the bucket stroke. The switch, so that the drum stroke relay is energized, drives the drum mechanism to dial the bucket, and the dial barrel mechanism is reset and then hits the bucket bucket stroke switch action, even if the electromagnet IDT is operated, the reversing valve is reversed, and the hydraulic cylinder enters the work again. status. 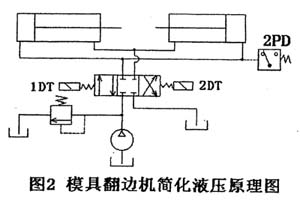 The above is a brief introduction to the working principle of the hydraulic drive mold flanger. In Figure 2, only the main working circuit liquid recognition drive mode is easily realized. 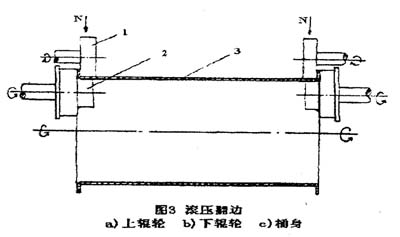 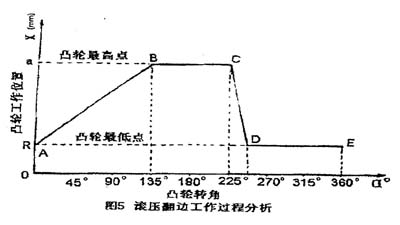 The upper roller pressing action is generally realized by the cam slider mechanism, and also works with the cylinder, but the cylinder movement is not accurate, so there are many cam mechanisms in the country. The downward movement of the upper roller should be divided into three phases, namely, the downstream phase, the stagnation and pressure holding phase, and the upward idling phase. Figure 5 shows the working process of the cam rotation one week. The analysis is as follows:

The AB section is the cam pressing stage, and the working radius of the cam is rising. At this time, the cam is turned from the lowest point to the highest point, and the upper and lower rolls are gradually pressed. When the point B is reached, the flange is basically formed.

The BC section is the cam holding phase, and the BC section is on the cam with the rotating shaft as the center of the arc. The upper and lower rollers are pressure-preserved after the burring is completed to eliminate the defective defects occurring during the burring process and reduce the rebound force.

The CD segment is a fast return segment, the cam is lowered from the highest point to the lowest point, and the flanging process is completed.

The DE segment is the stop portion to remove the flanged barrel and place the barrel to be processed.

As shown in Fig. 6(b), the bulging block expands outward in the radial direction, forcing the barrel edge to be turned outward. The bulging block swells to the highest point, the burring has been basically completed, and then the bulging block is retracted, the nipple block is loosened, the positioning plate is moved to both sides to exit the barrel body, and the barrel of the turned side is pulled out from the lower part.

The expansion type has high efficiency and good quality, but the equipment is more complicated and the structure is larger. At present, this kind of technology is widely used in the burring process of small barrels in China, such as the barrel flange of small square barrels, etc. This method is most suitable.

The expansion type flanging adopts the hydraulic transmission mode, the mechanism is reduced, the work is stable, the force is large, and the effect is excellent.

5. General technical requirements for the flange of the barrel

The width of the flange of the barrel should meet the requirements of the process size. The flange angle is generally 90Â°ï½ž100Â°, and the edge width error should not be greater than 0.5-1mm: the flange should be smooth and round, and there should be no cracks or wrinkles. There must be no protruding nozzles, broken edges, etc. at the cuffs.